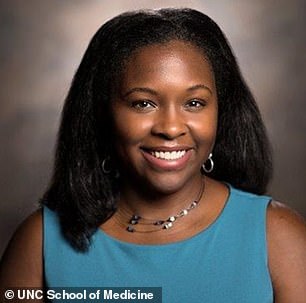 Dr Crystal Wiley Cené (pictured) of the University of California, San Diego, said that the findings are 'quite significant' judging by how many Americans are suffering from loneliness

Social isolation and loneliness throughout life can significantly increase a person’s risk of suffering from a heart attack or stroke – and with more people in America lonely than ever experts fear their could be a surge in these cases in the future.

A scientific statement published Thursday in the Journal of the American Heart Association states that social isolation and loneliness are linked to a 30 percent jump in heart disease and stroke risk.
While a lack of social interactions is linked with all kinds of health issues, it’s strongest link could be to cardiovascular problems. The added stress that could often come with isolation can add an unneeded load to the body and cause harm.

Experts warn that two groups in particular are at risk. Elderly Americans – who through retirement and widowhood often end up alone – and generation Z, a group described as the loneliest generation ever. The long-term loneliness of Gen Z is particular poses significant future health concerns.

Experts write that social isolation is linked to an increase in all causes of death, with men being at an especially high risk.

People who are lonely are more likely to suffer from chronic stress, one of the main factors that can impact heart health.

They explain that social isolation is also linked to increased levels of inflammation across the body – raising the risk of heart disease and stroke, among other health issues.

‘There is strong evidence linking social isolation and loneliness with increased risk of worse heart and brain health in general; however, the data on the association with certain outcomes, such as heart failure, dementia and cognitive impairment is sparse,’ Cené explained.
These data put two particular groups in general at high risk, both the adults and youngest parts of the U.S. adult population.

Loneliness among the elderly is a well documented phenomena. Elderly people often do not have the ability or energy to take part in social events the way they could in their youth.

Many close friends and family members will also have died over the years as well, causing them to lose connections. Younger family members generally grow up and enter their own lives away from their older

Isolation among generation Z is a relatively new concept, though. Generally accepted as people born between 1997 and 2012 – it includes Americans currently aged nine to 25 years old.

It would be expected for people that fall into these age groups to have bustling, busy, social lives, but that has proven to not be the case.

The statement cites a Harvard report that finds Gen Z adults to be the ‘loneliest generation’ in American right now.

They point to increased social media use and less in-person engagement with their peers as reasons for the bizarre distinction.

‘Given the prevalence of social disconnectedness across the U.S., the public health impact is quite significant,’ Cené said.

The COVID-19 pandemic likely played a role as well. Closures of schools and many recreational activities has been blamed for a surge in mental health issues among the youngest of Americans in recent years.

Loneliness and social isolation are two of the leading causes of depression in particular, the statement reads.

Now that the issue has been raised by experts, Cené says it is time to respond with solutions:

‘There is an urgent need to develop, implement and evaluate programs and strategies to reduce the negative effects of social isolation and loneliness on cardiovascular and brain health, particularly for at-risk populations.

‘Clinicians should ask patients about the frequency of their social activity and whether they are satisfied with their level of interactions with friends and family.

‘They should then be prepared to refer people who are socially isolated or lonely — especially those with a history of heart disease or stroke — to community resources to help them connect with others.’