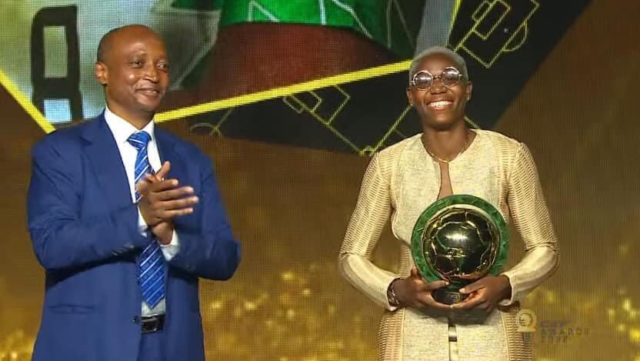 The Nigerian was named the winner of the award on Thursday, July 21st, 2022 in Rabat, Morocco where the Women’s Africa Cup of Nations is being hosted. The striker beat Ajara Nchout Njoya (Cameroon and Inter Milan) and Zambia international Grace Chanda (Zambia and BIIK Kazygurt to clinch the award fo the fifth time.

The forward player won the award following her form for her club Barcelona in Spain. Oshoala became the first woman to win the CAF award five times surpassing her fellow countrywoman, Perpetua Nkwocha who claimed the accolade on four occasions. The striker won the award in 2015, 2017,2018, 2019 and 2022.

This is a class speech by Asisat Oshoala 👏🏽🇳🇬🔵🔴 ⚡#CAFAwards2022 pic.twitter.com/nIWBB9FQTr

She scored 20 goals in 19 league appearances for Barcelona which saw her share the award with Brazilian Geyse Ferreira, who managed the same number of goals in 27 appearances for Madrid CFF.