‘Insurgency Pushed Me Into Assisting Pregnant IDPs Deliver Their Babies’–Dada 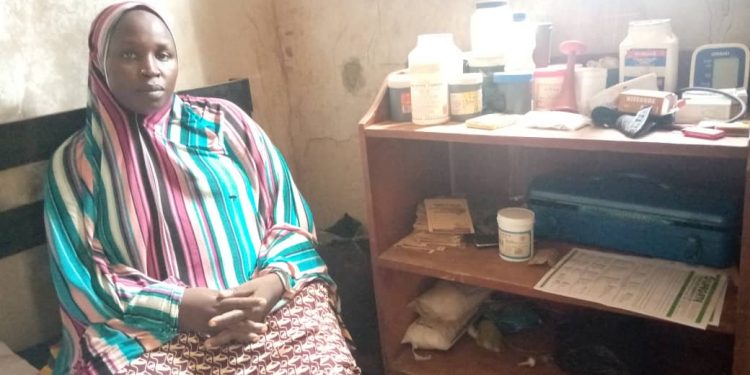 Aunty Dada, as she is popularly known has for eight years now, assisted pregnant women in the Internally Displaced Persons Camp in Kabusa deliver their babies. She spoke with CHIKA MEFOR-NWACHUKWU on her experiences and challenges.

If anyone had told Dada Hauwa, an Internally Displaced Person residing in Kabusa, in the Federal Capital Territory,FCT, that she will one day become a traditional birth attendant, she would never have believed. For one, Aunty Dada as she is usually called, had no skills or experience about child delivery. Circumstances beyond her control had pushed her into the work. An attack by the Boko Haram terrorist group in her home town of Gwoza, Borno State in the North Eastern part of Nigeria sealed this fate for her.

READ ALSO: Why Tinubu Was Flown Out Of The Country

“They arrived in the middle of the night and burnt our houses and shot at us,” Dada narrated as she spoke of the day she and her family became homeless in 2014.

The United Nations High Commissioner for Refugees ,UNHCR, says that more than 2.2 million people have been rendered homeless in north-eastern Nigeria due to Boko Haram violence since 2014, including more than 2 million internally displaced people and some 190,000 refugees in neighbouring Cameroon, Chad and Niger.

Dada not only became homeless, her two youngest children got missing during the turmoil that happened that night after the attack.

“I have eleven children. Till today, I haven’t seen my two children. They were three and seven years old at that time,” she stated in anguish.

Dada and her family managed to find their way to an Internally Displaced Persons(IDP) camp in Adamawa. In the camp, the displaced persons, especially women and children had no access to health care.

“It was a terrible situation”, Dada continued her narration. “There were pregnant women who needed help. The women pleaded I help them. That was how it started.”

Dada, with no prior experience or skills on child delivery was called upon every time there was a woman in labour.

She reminisced over one of her most challenging experiences where she had to do the unthinkable.

“A woman could not push out her baby. She was in labour for three days. She was in pain and it seemed there was no end. That was when she told me to cut her and bring out the baby,” she said.

She narrated how she used a razor blade to cut the woman and bring out the baby, revealing that they had to use gum and sellotape to cover the wound over the woman’s abdomen.

“For one month, the wound was bringing out pus and she kept washing it out. The wound later healed and the woman is okay now. We had to do all that because we had no other option. It had happened now, I would have advised the woman to head to the hospital,” she stated.

After a year, Dada decided to come over to Abuja because she felt there would be better opportunities for her in the capital city. She stayed in the IDP camp at Area 1, Durumi but later moved to Kabusa.

In Kabusa, Dada had to continue with her work of helping pregnant women deliver their babies.

“ I had to continue because the cost of delivery in the hospital was expensive. The women do not have money to visit the hospital so they come to me,” she narrated.

Dada’s space of work then was a zinc which she arranged for privacy. However, she revealed that a white woman from the United Kingdom had assisted her to build a two-room structure with two toilets. The same woman had bought a mattress, a bed and a seat for the labour room.

With the help of Non-governmental organisations, which she couldn’t remember their names, Dada had undergone some training which she said had helped her to not only advance in her work but helped her attend to the children when they were sick.

“For the displaced persons, I do it for free but for other women, I do collect money. They give me from N5,000 to N10,000 which I use to buy the delivery kits I need,” she added.

While Dada could not really give an accurate number of the women she has helped deliver their babies, she stated for example that a particular woman had given birth at her place four times over a period of six years.

She has also extended her services to antenatal services and asks for help from medical personnel in the area whenever she needs them.

“Whenever any of the women go for a scan, I ask the owners of the medical laboratory they visit to explain the results for me. They tell me the condition of the baby and their recommendation,” she said.

She stated that any case she couldn’t handle was referred to the hospital and expressed joy that she had never lost a baby or a mother.

Her days, she said, are occupied with attending to pregnant women. She added that she has not succeeded in getting people to join her in her work because ‘no one wanted to work for free’ but added that many have also complained of being scared of blood.

NDLEA To Launch A New Help Line For Nigerians Thisday

She has however had student nurses come to learn the practical aspect of child delivery from her; a thing she says she enjoys doing.

Dada’s work comes with my challenges,“I use touch light to work. I need a generator to help me while working when there is no light.”

NGOs have always been of great help to Dada as they donate drugs and delivery kits to her but those donations have dwindled over the years.

“The NGOs have tried. They are tired. I seriously need those delivery items to help the delivery like hand gloves, tissue, disinfectants and also drugs,” she said.

“In the hospital, they are asking us to pay N15,000 or more. But here, it is free. I know that the economy is hard so this baby I am carrying is my “last bus stop’,” she said with strong determination.

The mother of six who revealed that she arrived in Abuja from Gwoza with her husband in 2014, stated that she mans a provision shop for someone who pays her N5,000 a month.

“My husband is not doing something substantial. How I wish we can go back to Gwoza,” she lamented.

Going back to their homeland is one of the wishes of the displaced persons in Kabusa. The secretary of the IDP camp in the area, Usman Adamu pleaded with the Governor of Borno State, Prof Babagana Zulum to find a way to relocate them back to Gwoza.

For the meantime, Adamu pleaded for a space where the displaced persons can stay until they are relocated.

“The people that have accommodated us since we came in are all tired. We can’t keep staying until they pursue us,” he lamented.

Founder of an NGO, The Skilled Women Initiative (TSWINI) who has worked with the IDPs since 2018, stated that apart from issues of accommodation and access to health, the displaced persons battle with lack of food, unemployment and access to education for their children.

Nwankwo called on the government to look into the plight of the displaced persons as they had been thrown to live in the FCT due to no fault of theirs.

The National Commission for Refugees, Migrants and IDPs, NCFRMI, formerly known as the National Commission for Refugees (NCFR), is an agency of the Federal Government of Nigeria, established by Decree 52 of 1989 now Cap. N21, Laws of the Federation of Nigeria, 2004 (NCFRMI Act) to manage the affairs of refugees, migrants and internally displaced persons in Nigeria.

Senior Protection Officer, IDP Department in the Commission, Aisha Mohammed said in a phone interview that the Commission has been in constant interaction with the displaced persons adding that in partnership with NGOs it has carried out many interventions.

“Even now, I am at the Kabusa Camp, anchoring an awareness on sexual reproduction health; use of contraceptives, the importance of spacing and awareness on gender-based violence,” she said.

Why Tinubu Was Flown Out Of The Country