by Kakaaki Reporters
in Agriculture
0 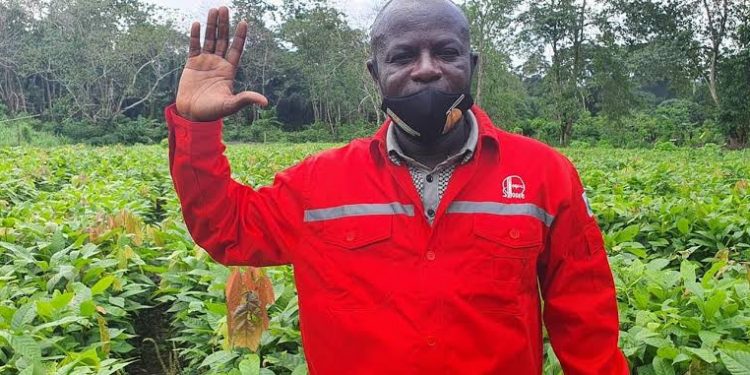 Governor Ben Ayade of Cross River State Special Adviser on Cocoa Development and Control, Dr. Oscar Ofuka has been honoured with award of honour on “National Outstanding Agriculturist Man of the Year” by the “Standup for Women Society” (SWS) during the society’s National Conference and Summit, at the Pelican International Hotel, Lekki, Lagos at the weekend.

Presenting the award to the Special Adviser, National President/Founder of the organization, Barrister Deborah Ijadele-Adetona said Dr. Ofuka was honoured for his sterling performance in the development of the agricultural value chain in part of the country adding that as a foremost driver of government’s agricultural program especially in the cocoa sector in Cross River State wherein women have been greatly impacted on Dr. Ofuka is deserving of the honour.

READ ALSO: ‘We Took Her To Hotel, Drug Her With Yoghurt, Stab Her To Death, Sell Her Baby For N150K’–Abia Murder Suspects Confess

The SWS President further eulogised the sterling qualities of Dr. Ofuka saying that he has been a pivot for the promoting of women participation rural agricultural even as he encourages them to become catalyst for economic growth and development.

She noted that the Special Adviser has also been instrumental to the success of the cocoa industry in the State through the Cocoa Revolution Initiative of the Senator Ben Ayade led administration and urge the government to expand the development to other states of the country.

Responding, the Special Adviser expressed appreciation to the Almighty God for the grace to accomplished the feat; to Governor Ben Ayade for the opportunity to serve where upon he was single out for the award and to the SWS for the honour.

He said he was encouraged by the award to take up more critical responsibility that would make life meaningfully for the masses.

Ofuka noted that women have occupied a pride of place in national development and therefore deserved to encouraged to sustain the feat in the best interest of the society.

According to him, agricultural production has been identified as one avenue through which women can feature prominently to enhance economic growth and development for a stable society adding that the decision to engage them massively in agriculture was informed by this reality.

The Special Adviser stressed that with the massive involvement of women in agriculture there has been a marked reduction in hunger and poverty in Nigeria today.

He commended Governor Ben Ayade for exhibiting a gender friendly disposition as visible in the opportunity and encouragement of women to be actively involved in agricultural value chain especially the cocoa industry in Cross River State.