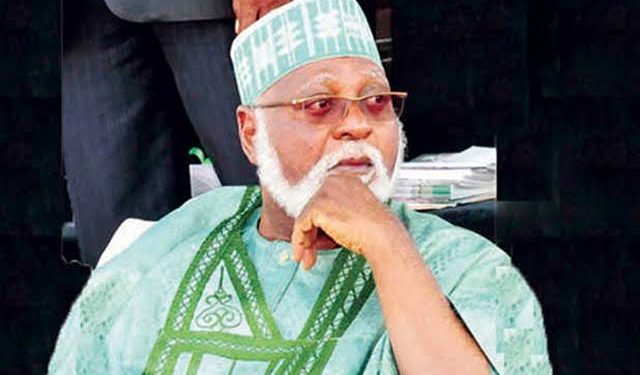 Aformer Nigerian Head of State, General Abdulsalami Abubakar (retd.), has been discharged from a London hospital after treatment for an unknown ailment.

According to an earlier report, General Abdulsalami (retd.) was flown abroad over his deteriorating health condition.

The retired Army General, who was taken abroad about three weeks ago for medical treatment, according to reports, may have suffered a partial stroke.

He was first flown to Dubai in the United Arab Emirates (UAE) but was thereafter taken to a hospital in the United Kingdom (UK).
Abubakar was accompanied by his wife and former First Lady, Justice Fati Abubakar.
The National Peace Committee (NPC) Chairman, according to the report, is in a stable condition as doctors continue to monitor him.

A media aide to President Muhammadu Buhari, Garba Shehu, on Monday evening said the former Head of State was not in a “serious condition.”
Shehu, in his post, said, “Alhamdu Lillahi for Allah’s mercy. I just ended a visit to His Excellency Abdulsalami Abubakar, former Head of State. He is out of hospital in a London apartment and apparently in no serious condition.
“He was his jovial self, maintaining a keen interest in developments back at home in Nigeria. Please, no cause for alarm.”