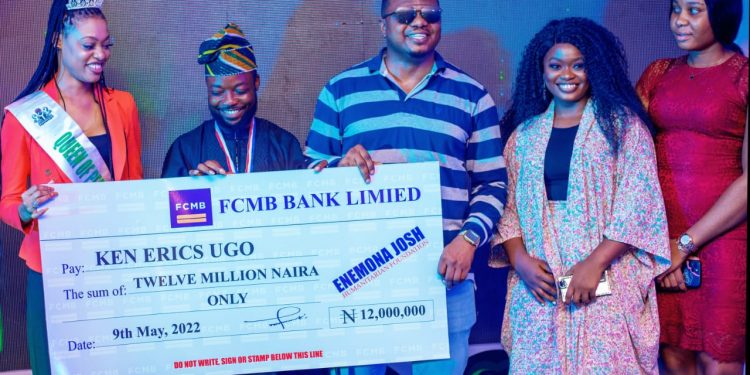 A humanitarian non-governmental organisation, Enemona Josh Humanitarian Foundation was on Monday unveiled in Abuja amidst cheers and excitement as it is poised to touch the lives of less privileged Nigerians for good.

This is even as the organisation also signed as its brand Ambassadors, Nollywood actor Ken Erics and singer Abigail Omonu.

The event which took place at the prestigious Sandralia Hotel Abuja attracted the presence popular music artiste, Faze who thrilled audience with his hit songs.

As an indication of the organisation’s readiness to achieve its set goals and fulfil its contract agreement with its newly unveiled ambassadors, it presented a cheque of 12 million to Ken Erics while 2 million cheque was presented to the female Nigerian artist from Kogi state, Abigail Omonu.

Both ambassadors expressed gratitude to the organization for bringing them on board, pledging to give their best in achieving the aims and objectives of the founders.

High point of the event was the presentation of award as Instrument of commendation, *the leadership prize for excellence* to the President and Founder of the Foundation, Ambassador Gabriel Enemona Onoja by Divine Otu Girl Child Education Foundation.

The team was led by Amb. Divine Ada Otu who handed the award to the recipient.

The team was led by Christabel Nanji Rimsah

In his remarks, founder and President of Enemona Josh Humanitarian Foundation, Ambassador Gabriel Enemona Onoja expressed gratitude that God has used him as an instrument to bring light in the lives of people.

He also thanked all present at the occasion including his international partners for their relentless support.

Numerous beauty queens from different brands were also present at the event.

A renowned TV host, the content developer of the foundation and director of the African People TV, Ambassador Sunday Atabo added glamour to the event as the anchor person.