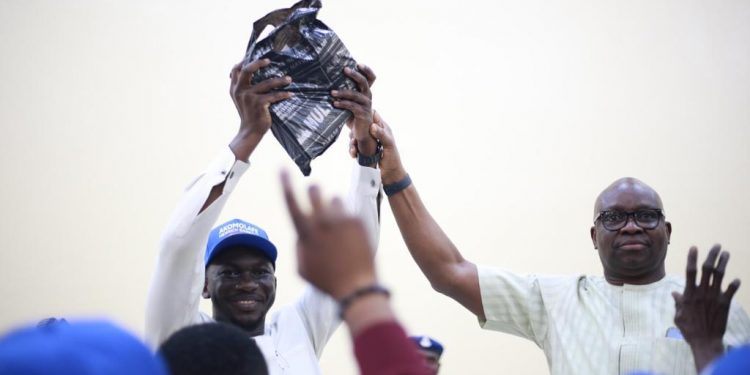 Akomolafe, Henrich Bankole (Àtúnkọ́) and PDP leader in Ekiti state,Ayodele Fayose after he was declared unopposed

It was an atmosphere to behold when on Wednesday, the front runner and the people’s choice for the Ekiti South Federal Constituency 1, Ikere, Ise/Orun and Ekiti South West, Engr Akomolafe Henrich faced the screening panel of the PDP as the unopposed Aspirant, he proved why he’s a force to be reckoned with as he was given a nod to represent the people of the Federal Constituency.

The first phase of his campaign has received the massive support of the people and no doubt played a role in convincing the leadership of the party and all stakeholders why he should be the flag bearer of the Peoples Democratic Party (PDP) of the state.

Speaking after his win, he appreciates the efforts of the Father Leader of the state PDP, H.E, Ayodele Fayose who believed that he, Engr. Henrich Akomolafe remain the man to strengthen the efforts of PDP to achieve victory ahead of the gubernatorial poll in Ekiti state.

According to him, “I want to show my appreciation to the incoming Governor Bisi Kolawole for his countless support in making my ambition a reality, knowing the fact that he has stated it clearly that youth involvement in governance is one of his major political agenda.

“I am grateful for his interest and I owe him a sense of duty to ensure that we deliver on this mandate and more significantly that we redefine what quality representation is, especially for the people of Ikere, Ise, Orun and Ekiti South West.

“I acknowledge the effort of the entire Àtúnkọ́ team, home and abroad. The PDP supporters, the community and importantly our Royal fathers the Ogoga of Ikere, Oba Adejimi Adu-Alagbado and The Olukere, Oba Ganiyu Obasoyin who have been unequivocal in their support.

“By the Grace of God and by the will of men who have been by my side since day one, on February 25, 2023 , this mandate shall be sealed and we shall commence our rebuilding journey process,” Akomolafe, Henrich Bankole (Àtúnkọ́) stated.