...says we are not going to sell nudity, profanity and vulgar languages. 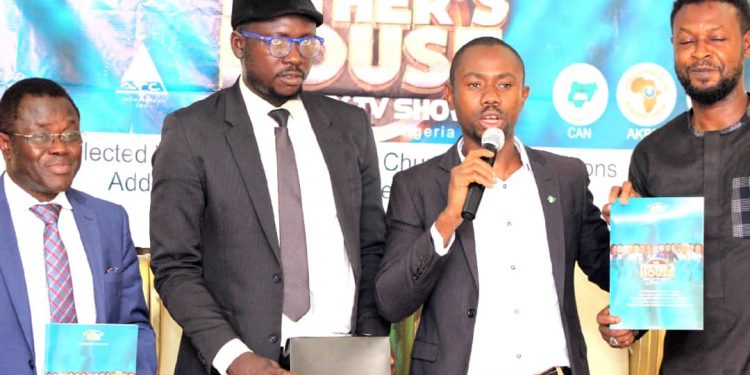 A group under the Christian wing, Father’s House is set to host it maiden edition of a Reality TV Show that addresses Nigeria’s national and moral issues in for 40 days.

It was also revealed that they would be  hosting or housing selected Christian youths from different denominations. Those from the Roman Catholic, Pentecostal, and from Celestial Church backgrounds.

The Father’s House reality TV project with the theme: “How Can The Church Fix Nigeria” will commence from the April 30, 2022 and will air on different TV platforms such as: Arkflix, DStv, GOtv ,Tstv channel,Consat, StarSat, and MyTV.

Addressing journalists in Abuja on Friday, the Project Director, Apostle David Abraham explained that the programme is designed even for those that aren’t Christians.

He added that Muslims and even traditionalists can watch it because the problem Nigerians are going through doesn’t respect religion or tribe.

The Project Director explained that the projects is going to have a strong bearing on the lives of people because Nigeria has been labeled the poverty capital of the world; one of the unsafe places to give birth to children, the most insecure zones on earth and the most religious place on earth which is a a sharp contrast.

Abraham further explained that by the leading of the Spirit and from the advice of their fathers of faith across all the denominations, they put together what they can call the first faith based national development reality TV show.

“We are going to use state of the art equipment, very serene and aesthetic environment to interpret the Word of God in such a way that the ordinary man on the street can understand.

“We are not going to sell nudity, profanity and vulgar languages.we cannot do that. But we are bringing inspiration, innovation, creativity that can keep the whole family glued to the television almost 24 hours a day,”he said.

He noted that the Roman Catholic Church especially influenced governance across the world. Some of the technological advancement we have seen over time is a product of church men and women and coming down to Africa or to Nigeria here.

“Many people would ask, how can the church influence governance, economic activities, culture, like our father said, we have reached a point in this country where we should declare a cultural state of emergency. If you go through the media, the stories you hear, they are heartbreaking.

“We are bringing them together for 40 days and they are core assignment is to answer several challenges bedeviling our country, Nigeria.

“How can people that are crying to God every day be number one in areas of negatives, there is a knowledge gap, there is an action gap and that knowledge and action gap is going to be preached by the father’s house,”he said

While speaking on the rewards for winner,producer of the project,Otto Paul Adah said the winner will father’s blessing because money is not ultimate .We would seek God blessings for the winner and not money.

“We are projecting what is called blessing that comes with money and some other goodies,but we don’t have specific amount for the winner”.