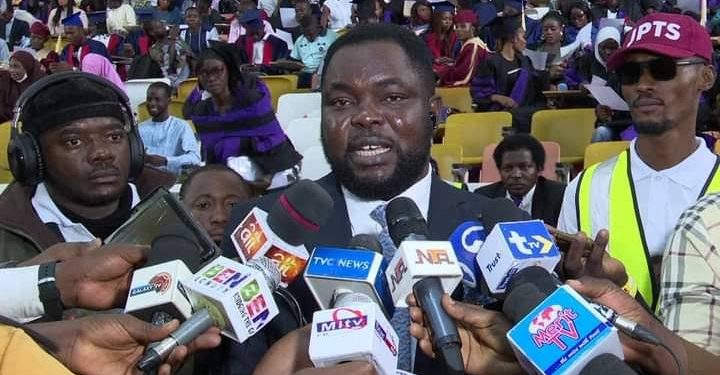 Speaking after he picked the form in Abuja on Wednesday, Imumolen said he has confidence he will win the 2023 presidential election.

Imumolen who said he grew up in Lagos experiencing bad governance, added that God has helped him to help others.

“I said to myself that I will takeover this battle. I am here to pick the nomination and the expression of interest forms under our great party, Accord Party.

“Nigerians are tired and now looking for alternatives. We represent hope, new beginning and the alternative they are looking for. Nigeria as a nation is almost gone but Accord Party will participate in the next election and emerge as the ruling party by the grace of God,” Imumolen said.

“Nigeria is no longer safe. You can’t travel by road. People are killed in Plateau, Kaduna, Niger and many other states. The railline have been attack. We need fresh minds to run the affairs of the country and handle the economy.

“We want a straight forward leadership. Look at my CV, it’s above every Presidential aspirant vying for the office of the president. We will look at security, education, and digitize the economy,” Imumolen said of what he will do as president.

According to the presidential aspirant, there are so many children crying on a daily basis for good governance and added that God has answered their cries and that of Nigeria.

On his part, the National Chairman, Accord Party, Muhammad Lawal Nalado, declared that comes 2023, a youth will emerged the President of Nigeria.

According to Nalado, it is the youths that fought for the Independence of Nigeria adding that all the leaders that emerged after independence were not above 40 years.

Speaking while handing over the nomination and expression of interest forms to one of the Accord Party presidential aspirants, Prof Christopher Imumolen, the chairman said even when the military took over power, all of them were youths.

“I always feel bad when I hear youths saying that power has not been given to them. No one will give you power. You have to work towards it. Those who took over power in the past were youths. Gen Yakubu Gowon was not yet married when he became the head of state. He was 29 years.

“Most of the development that we see in Abuja today were done by President Ibrahim Babangida and he was a youth.

“Most of the infrastructures in Nigeria were develop by the youths. Why are the youth of today waiting to be giving power. The youths of yesterday took power and they perform. I am always in pain each time I hear youths saying power has not been given to them. The youth must use their thumb rightly and rescue Nigeria which is the sign of Accord Party,” Nalado said.

According to him, “If you did not decides well, it is your thumb that deceived you. I am not saying the youth should be violent, but they must utilise there numerical strength and ensure they elect a youth as the president in 2023 and Accord Party will ensure it produce a youth as president.

“At 29, I was a member of the House of Representatives without a car for one year. I was using taxi to the national assembly as youth. These are the sacrifices we made as youths. We will make sure our party produce a youth as the president,” Nalado added.

JUST IN: 6 Kano Islamic Clerics Die In Auto Crash After Da’awah In Sumaila