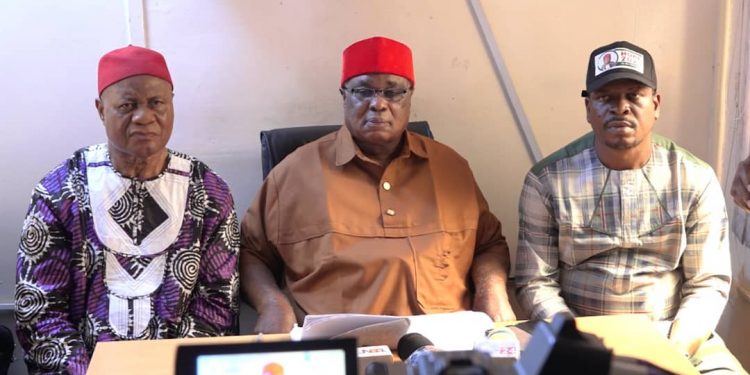 The Presidential aspirant under the People’s Democratic Party (PDP), Dr. Nwachukwu Anakwenze, has demanded that the party’s presidential ticket for 2023 should be zoned to southeast of the country.

Anakwenze disclosed this shortly after summiting his expression of interest and nomination forms, at the partys national sectariat,in Abuja, agreeing that the Southeast zone had often helped other parts of the country to produce the nation’s president.

Nwachukwu Anakwenze, also vow that no presidential aspirants from the south East will step down for any zone.

The presidential aspirant also solicited support of Nigerians as he revealed his plans to address the current hardship faced in the country is as a result of to bad leadership.

According to him,Southwest was compensated with power at the death of Chief MKO Abiola, the winner of the 1993 presidential election.

“We supported everybody. It’s time for everybody to support us. Well, the West have had their own.

“South South had its own turn. So, for equity and fairness, the only zone that has not ruled this country is the Southest and that’s why some of us are throwing our hats into the ring to be able to talk to the PDP family and delegates that will come for the congress to consider fairness.

He, however, blamed the suffering of Nigerians on bad leadership, saying that if he wins the PDP presidential ticket and emerges as president, he will rebuild the nation,  leveraging on the talents of the youth.

“I know the PIB law passed recently, that encourages modular refinery but how many of them have been made known. I can be able to pull it from $1 million to $150,000 which is accepted to the license fee. I believe that the problem of petroleum scarcity will be solved,”he said .

Meanwhile, PDP has fixed April 25th, 2022 for the screening of its Presidential aspirants.

The presidential aspirant solicited support of Nigerians as he revealed him plans to address the current hardship faced in the country is as a result of to bad leadership.