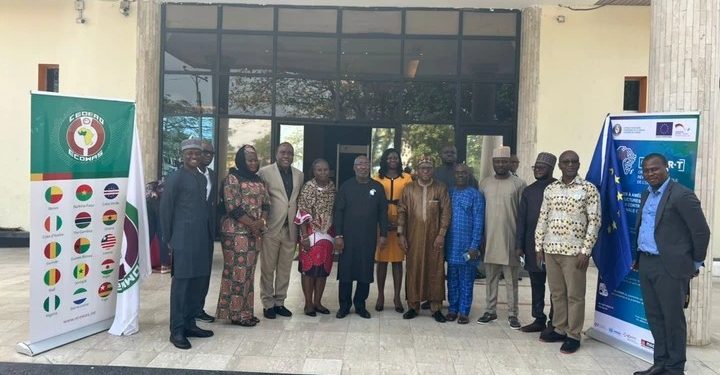 ECOWAS Commission, through Organised Crime West African Response to Trafficking (OCWAR-T) has urged Nigerian government and governments of other countries within the ECOWAS sub-sector to intensify the fight against proliferation of small arms and light weapons threatening the peace and insecurity of the region.

The Commission through the organised Crime West African Response To Trafficking (OCWAR-T), stated that if the flow of small arms and light weapons can be controlled, social vices like Kidnapping, drug peddling, terrorism,armed banditry and trafficking in human person can be put to checked.

The Commission gave the charge during the Joint Planning Retreat On Enhancing Small Arms Control in Nigeria which took place at Transcorp Hotel Calabar during the weekend.

Speaking on the topic, “Strengthening Small Arms Control in Nigeria”, where new guidelines to be followed and subsequent actions is presented before the Nigerian technical and Civil society partners,Chief of Division Small Arms, Nanan PieX, stated that if the guidelines were to be strickly followed, insecurity and several crimes troubling the country and the region of ECOWAS, would have become a thing of the past.

“It is only through unity and pooling of resources that threat of arms & human trafficking issues can be addressed”. Nanan PieX stated.

He called for intensification of fight against arms proliferation and other vices like Kidnapping, drugs and human trafficking among others by member states that made up the Commission for restoration of peace in the ECOWAS region.

A communique issued by the Commission at the end of retreat with Civil societies and Nigerian technical partners, the Commission stressed that the retreat is held to update participants’ knowledge on review of firearms act.

Other reasons includes, “To facilitate transformation of newly created National centre on small arms into fully-fledged National Commission on small arms and passage of a Nigeria firearms bill.

“SALW threat poses setbacks to the collective peace, stability and security in the ECOWAS Space resulting in widespread destruction of lives and properties.

” It is More so apparent in the frontline states of Burkina, Niger, Mali and Nigeria, where the menace of terrorism, kidnapping and banditry continue to thrive.

“One of the potent regional responses to these crises, was the adoption of ECOWAS Convention on Small Arms and Light Weapons.
“Their Ammunition & Other Related Materials. In June 2006, ECOWAS Authority of Heads of State and Government promptly signed it and by September 2009, the instrument came into force as legally binding.

In the institutional and implementation arrangement’s component of the Convention, it establishes the need for member states to put in place national commissions on SALW.

“In this regard, many member states responded positively based on the obligations of article 24 of the Convention, except The Gambia and Nigeria.

“The case of Nigeria is uniquely demonstrating high level of political will on the part of the government, but it is however, inhibited by consistent bureaucratic bottlenecks on the side of those saddle with tasks of implementing such policies”. The communique said.

The communique stated that objective of the Meeting is to have joint planning sessions indicating specific interventions of technical partners together with ECOWAS Commission at enhancing practical actions against Small Arms and Light Weapons proliferation in Nigeria.

Also, to Bring technical partners, CSOs and ECOWAS Commission together to appraise the national mechanism as well as control efforts against SALW management and control;

This meeting was attended by the key technical partners and selected CSOs, working in the field of SALW Control and Governance. The Coordination and Joint Planning Meeting is an important mechanism at ensuring that all partners are updated on the current situation as well as the overall context of SALW challenges in Nigeria.