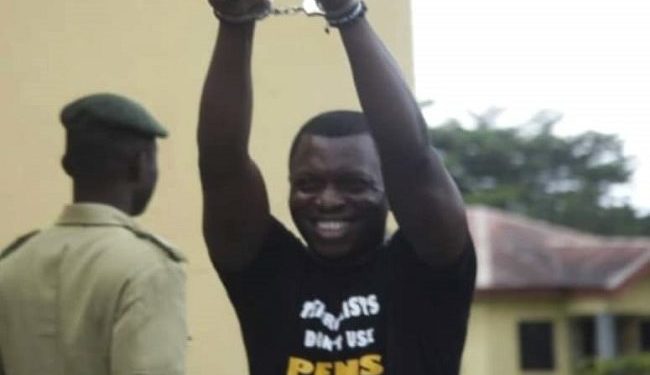 A Federal High Court sitting in Calabar, the Cross River State capital yesterday discharged a criminal case brought before it against publisher of Crossriverwatch online news media, Agba Jalingo for alledged involvement in terrorism and treasonable felony by the Cross River State government.

The federal high court presided over by justice Ijeoma Ojukwu said the discharge of Mr. Jalingo followed the decision of the Cross River State Government to withdraw the charges it had filed against Jalingo sometimes ago.

The state government had in February 2020, taken over prosecution of Jalingo from the federal government when the court granted bail after spending about 179 days in detention awaiting trial for the alledged offences that angered state and federal government.

Only yesterday, the director of Public Prosecution DPP in Cross River State, John Ogban Esq. told the court at the resumed hearing that took place on Monday in Calabar that he got directives from the Cross River State Attorney General, AG, Mr. Tanko Ashang that the case be discontinued.

According to the DPP who got slammed by the presiding Judge at the last hearing where the matter was adjourned stressed that he had filed a further amended charge before now, but made a verbal application for withdrawal of the case.

The DPP stated that government was backing out from the case because the government was no longer interested to go on with the prosecution of the matter.

According to defense counsel, a senior advocate of Nigeria (SAN), Mr. Adeyinka Olumide who did not object the verbal application hailed the state Attorney General Mr. Tanko Ashang for the directive.
“We commend the Honorable Attorney General of the State for taking this decision. We are happy that our harassment have finally come to an end” Barr. F. Baba Isa who was being accompanied by Olumide Fasika and Keyhole Enyia stated.

Jalingo’s counsel, prayed the court to release the sum paid as the bail bond into an interest yielding account by the defendant.

The matter was thereafter stepped down for the Court to verify the payment date among others items.

Relying on the Provisions of section 355 of the Administration of Criminal Justice Act upon resumption, justice discharged and acquitted Mr. Agba Jalingo, on all the four charges stressing that the charge had been dismissed.

However on the issue of application for the cash refund, the court stated that the sum and the interest should be paid to the online Journalist for the time wasted.

It would be recalled that Mr. Jalingo was sometimes in August 22, 2019 picked by security operatives following an article which he published in July same year that authority of the Cross River State Government alledged the article was libelous and tend to drag the image of state government to the mud.

Following the publication of the article, security operatives who were said to be in support of the state government picked Authur of the article Mr.Agba Jalingo and kept him in police custordy and allowed to cool his feat

After Jalingo spent 3 4 days in police cell, suspect was arraigned for alleged acts of terrorism, cultism, treasonable felony and attempts to overthrow the State government.

The online Journalist was subsequently brought to appear before the court where he pleaded not guilty and was latter sent to the facility of Nigerian Correctional Centre at Afokang, street Calabar to await trail.

Effort by suspect lawyers to grant him bail failed as justice Simon Amobeda,who was at that time the presiding over Court 2 refused to grant suspect bail until he was subsequently granted bail by Justice Sule Shuaibu who presided over Court 1, after Justice Amobeda rescued himself following the leak of audio tape which suggested he compromised the case.