Putin’s Convoy Of Corpses Sneak Out Of Ukraine 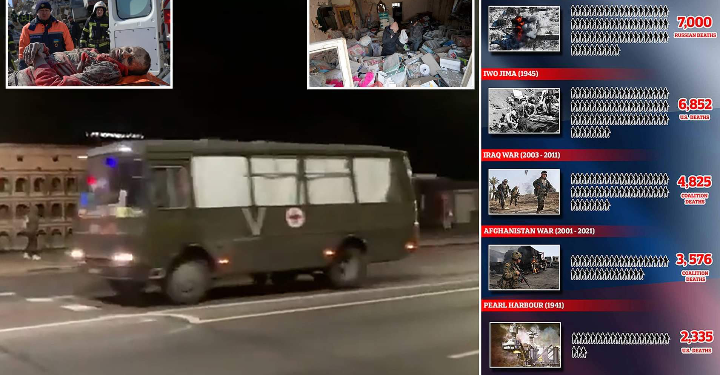 Putin’s convoy of corpses: Trains are being loaded with dead Russian soldiers in the dead of night after their deaths in Ukraine to hide true death toll, claim Belarus locals who say they have seen 2,500 bodies in two weeks

Video posted by Radio Free Europe/Radio Liberty shows military ambulances driving through the Belarusian city of Homel in early March, with employees at the region’s clinical hospital claiming more than 2,500 bodies have already been shipped back to Russia as of March 13.

Now Belarusian medical staff in Homel, in southeastern Belarus, have described ‘overflowing’ morgues, with one resident of the city Mazyr claiming: ‘Passengers at the Mazyr train station were shocked by the number of corpses being loaded on the train. After people started shooting video, the military caught them and ordered them to remove it.’

A doctor at Mazyr’s main city hospital warned: ‘There are not enough surgeons. Earlier, the corpses were transported by ambulances and loaded on Russian trains. After someone made a video about it and it went on the Internet, the bodies were loaded at night so as not to attract attention.’

Officials at Hospital No4 in Homel are alleged to have begun discharging current patients on March 1 because of the sheer number of wounded Russian soldiers to treat.

Nigeria's Victor Osimhen Sets New Record In The Serie A