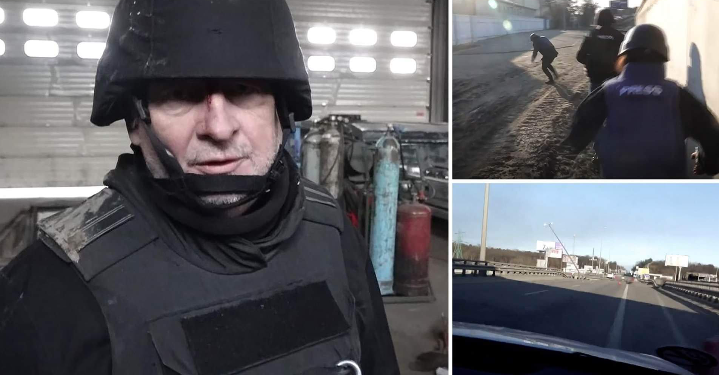 ADVERTISEMENT
The danger journalists face covering the war in Ukraine was shockingly illustrated last night as Sky News released harrowing footage of their team coming under fire.
Chief correspondent Stuart Ramsay was hit by a bullet in the lower back while in a car carrying his crew towards Kyiv on Monday.
ALSO READ: Russian Invasion: Ukrainians Shoot Down Russian Chopper With Missile
Two rounds also hit camera operator Richie Mockler in his body armour during the ambush.
Footage shows bullets striking the car and the team screaming as glass smashes around them.
It is thought the attack was carried out by a saboteur Russian reconnaissance squad.
After a tense standoff, the team miraculously ran for their lives using a concrete wall for cover before finding shelter in a factory unit.
They were later rescued by Ukrainian police.
The whole crew, including Sky News’ Dominique van Heerden and Martin Vowles, are now safe and back in the UK.
The fifth member of the team, local producer Andrii Lytvynenko, is back with his family in Ukraine.

WATCH: Sky News reporters ambushed near Kyiv, injuring one of them pic.twitter.com/zDXGGEwJ40