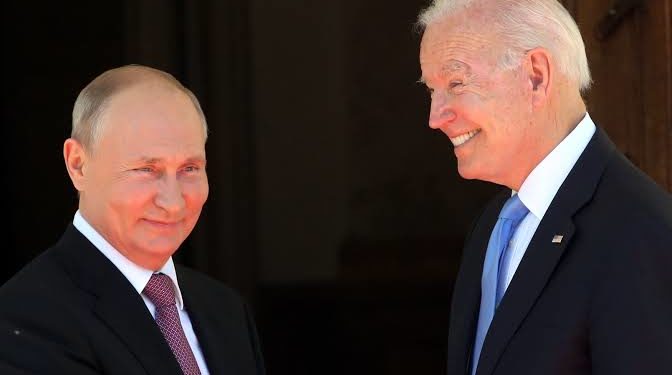 He threatened to impose the harshest sanctions ever on Russia.

He worked to galvanize U.S. allies into a united front. He supplied Ukraine with more weapons than any American president before him. And he beefed up U.S. forces on NATO’s eastern flank as reassurance of his commitment.

Notwithstanding U.S. President Joe Biden’s efforts to head off a Russian attack against Ukraine, President Vladimir Putin was undeterred.

On Thursday, he authorised what he called a “special military operation” into Donbass region of eastern Ukraine, marking a new high in post-Cold War tensions.

The scope of the offensive was not immediately clear. Explosions could be heard near Kyiv and in other parts of the country and Ukrainian President Volodymyr Zelenskiy said Russia carried out missile strikes on infrastructure.

How Biden handles the crisis, which Western officials fear could spiral into the bloodiest European conflict since World War II, is expected to have profound implications for his political fortunes and U.S. relations with the world.

Biden vowed the United States and its allies would respond decisively to Russia’s “unprovoked and unjustified attack”.

But his handling of the biggest international crisis of his presidency has been deemed something of a mixed bag so far.

Biden was always going to be limited because his administration made clear it would do whatever it could to help Ukraine defend itself but was not going to put troops on the ground.

His preference for diplomacy and sanctions reflects the scant appetite Americans have for intervention after the Afghanistan and Iraq quagmires.

Putin had the advantage of knowing Biden was not going to war against another nuclear power to protect a country that shared a long border with Russia – and with which Washington had no defense agreement.

Biden focused instead on coordinating with NATO allies, especially those in the east, worried about the spillover from Russia’s buildup of 150,000 troops on Ukraine’s borders.

Washington spearheaded an initial round of sanctions after Putin ordered troops into two separatist-controlled breakaway regions after recognising them as independent on Feb. 21.

It was a warning shot that failed to ward off Thursday’s action.

In the prelude, Biden’s messaging strategy was to issue dire predictions of an imminent invasion to show he knew what Putin was up to – even if he couldn’t stop him.

A key result has been to re-energise a Western military alliance that had fallen into disrepair under Biden’s predecessor, Donald Trump, who had questioned the value of NATO.

A senior European diplomat described Biden’s consultations with allies as “exemplary,” a contrast to how many partners viewed last year’s chaotic U.S. withdrawal from Afghanistan.

Some analysts questioned, however, whether deploying a few thousand additional U.S. troops to Germany, Poland, and Romania was sufficient and suggested Biden could have done more to maintain a credible military option.

“One of the shortcomings is the deterrence package that we’ve developed is kind of asymmetrical in that it is mostly economic and we are facing a military threat,” said Ian Kelly, a former U.S. ambassador to the OSCE and Georgia.

Kelly said Biden could have sought activation of the NATO Response Force and sent it into Poland and the Baltic states, with the message: “You have massed troops on your border. We’re massing troops on our border; we’ll withdraw when you withdraw.”

Next steps could include an attempt to sever Russia’s links to the global financial system.

Some U.S. lawmakers contended it would have been more effective to slap sanctions on Russia earlier, but Biden officials insisted that would have diminished their impact now.

It remains to be seen whether sanctions will get Putin to back down.

Biden’s decision to declassify intelligence about what it alleged were Russian plots to fabricate pretexts for a Ukraine invasion was also praised for countering Putin’s misinformation.

Andrew Weiss, a Russia expert at the Carnegie Endowment for International Peace think tank in Washington, said this “kept Putin in the hotseat.”

But the administration drew criticism for refusing to offer concrete evidence. Some commentators recalled intelligence claims used to justify the 2003 Iraq invasion of a renewed nuclear program that proved not to exist.

Biden was also hailed by Western governments for sticking to NATO’s “open door” for aspiring members.

But some critics said Biden should have been more explicit about how far away Ukraine was from entry, given that one of Putin’s chief demands was to eschew further expansion eastward of the security pact.

Biden’s response could also have repercussions for U.S.-China relations. There is a concern if Biden appears too soft on Moscow, China could take it as acquiescence to act against self-ruled Taiwan, which Beijing considers a renegade province.

As the crisis unfolded, Biden spoke regularly to world leaders, including Putin himself, taking a forceful stand with the former KGB officer to whom Trump had shown deference.

Putin’s defiance could give Republicans a cudgel to use against Biden and his fellow Democrats in the November mid-term congressional elections, which will decide the balance of power in Washington.

And Biden’s strategy leading up to the Russian attack will come under closer scrutiny as he charts the path forward.

Lawmakers Call For Immediate Evacuation Of Nigerians In Ukraine