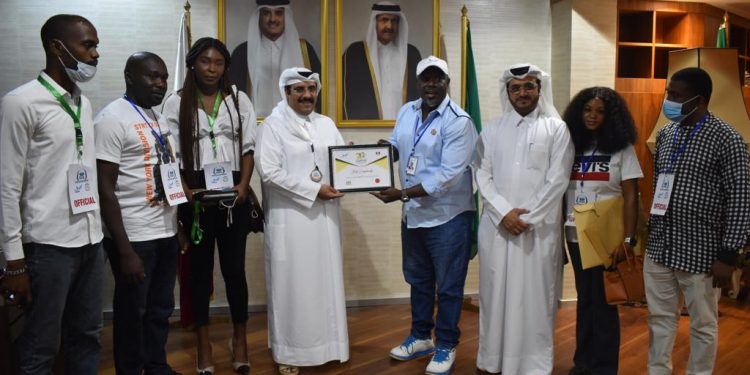 The Ambassador of the State of Qatar to Nigeria, HE Dr. Ali Ghanem Al-Hajri has endorsed the Nationwide Campaign Against Drug Abuse in Nigeria which was flagged off few months ago by the National Drug Law Enforcement Agency. He made the endorsement on the 20th of January 2022 while receiving a joint delegation from the Center for Ethical Rebirth Amongst Nigeria Youth(CERANY) and the National Alliance Against Drug Abuse(NAADA).

According to the statement which was released and signed by Ms. Adaeze Ezissi, the Programme Coordinator of CERANY, the Ambassador of the State of Qatar to Nigeria will speak at the forthcoming 2022 National Youth Conference on Drug Abuse. The Conference is organised to commemorate the 2022 International Day Against Drug Abuse and Illicit Trafficking in Nigeria.

Amb. Dr. Al-Hajri endorsed the Campaign after receiving a Platinum Medal of Honour from the joint delegation of CERANY and NAADA. According to the statement, the honour by the joint delegation was in appreciation of the efforts made by the State of Qatar in Nigeria. Over the years the State of Qatar has been supportive through her efforts in the UNODC anti-drug, anticrime and anti-terrorism programs in Nigeria.

Although the vibrant and proactive Ambassador had also thanked the joint delegation as he encouraged their voluntary contributions towards complimenting the efforts by the Nigeria Drug Law Enforcement Agency. Few months ago, the National Drug Law Enforcement Agency (NDLEA) flaggedoff the Nationwide Campaign Against Drug Abuse and since then several institutions and individuals have continue to make development efforts to support the campaign which is already making huge impacts.

2023: 'I Will Contest For Presidency Even Without Zoning'– Anyim