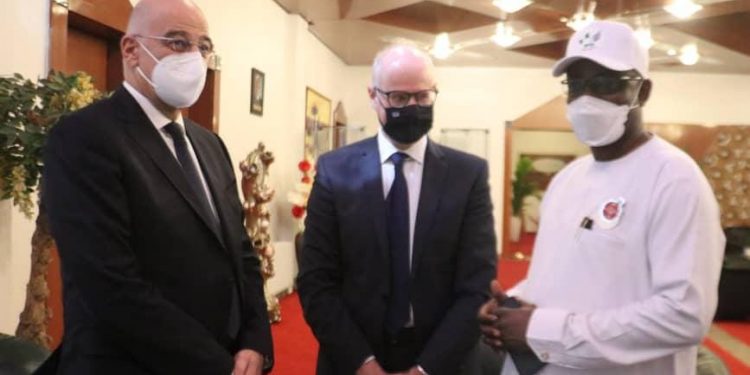 …As he Calls For A Sustainable Relationship

Following the donation of about one million doses of COVID-19 vaccine by the Greece government to Nigeria as the Federal Government moves to ensure more citizens are vaccinated against the disease, the Special Envoy on Diplomacy and Good Governance of the International Peace Commission of the UN, as well as Global Vice Chairman, Advocacy for Good Governance Network, Amb. Hussaini Haruna Coomassie has commended the Greece Government for their support, for providing vaccine to fight the dreaded COVID-19 and its omicron variant in the country.

Coomassie who made this known to newsmen while speaking with selected journalist at the Ministry of Foreign Affairs in Abuja, said the gesture was timely and prayed for a stronger relationship in other sectors, especially in the areas of Defence, Tourism, Trade & Investment.

He explained that Greece is an old ally to Nigeria but unfortunately, other Ambassadors failed to cement the relationship between the two Nations, until the assumption of office of the current Greek Ambassador to Nigeria, Amb. Ionnis Plotas, who with his Nigerian counterpart Amb. Opunimi Akinkugbe, vowed to actualise this dream.

“Greece is a Tourism Country as well as in Trade & Investment. Our countries have lots in common, I’ve travelled to Greece 38 times between 2011 & 2019, to establish strong and viable relationship, but my effort was truncated by the previous Greek Administration,” he added.

He further called on Nigerians and the government to cement the relationship that both countries have established.

Onyeama, on his part, said Nigeria has enjoyed a smooth partnership with Greece in the area of defence.

He said the present administration was willing to expand its partnership with Greece, especially in the areas of agriculture and infrastructure as acknowledged the donation of the vaccines in Abuja on Monday.

Hon. Dendias made the announcement at a meeting with the Minister of Foreign Affairs, Geoffrey Onyeama, and other Nigerian government officials.
He said Nigeria and Greece have enjoyed a favourable bond over the years and that his country was even willing to expand the relationship,

The Greek minister explained that such an expansion would culminate in the signing of Memoranda of Understanding on various issues affecting both countries.