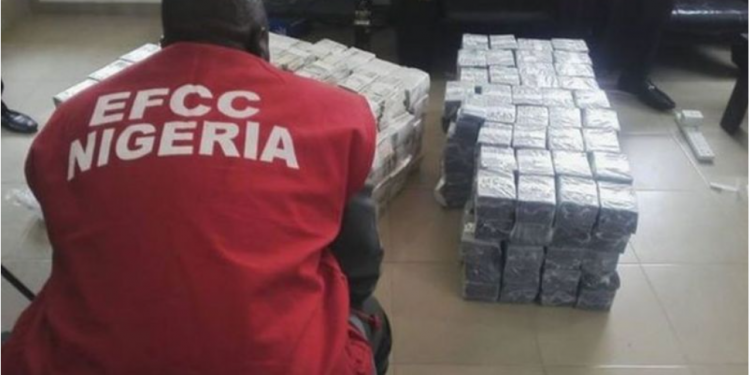 Insiders have revealed that Samuel Ogundipe, the editor of Nigerian website, Peoples Gazette, is now on the run after the Economic and Financial Crimes Commission (EFCC) and the Department of State Services (DSS) launched an investigation into his alleged attempt to blackmail the Chairman of Air Peace, Allen Onyema, into paying him $300,000

Newsdiaryonline gathered that about five months ago, Ogundipe had contacted Onyema to say his paper was working on a stinker on him. He, however, offered to drop the story if paid $300,000.

Our sources said for days, Mr Onyema tried to convince Ogundipe that the allegations being packaged against him by Peoples Gazette were false and only calculated to tarnish his reputation.

When the editor refused to back down, according to those familiar with the matter, the Air Peace chairman alerted the EFCC and the Department of State Services (DSS) on the plot to blackmail and extort from him by Ogundipe.

The EFCC and the DSS then set up a joint sting operation on the matter, our sources said. They asked Onyema to play along while the two agencies continued to monitor and record the communications between the Peoples Gazette Editor and the Air Peace chairman.

While playing along, Mr Onyema offered to pay Ogundipe $150,000 in three installments. After some back and forth, the journalist agreed.

Those familiar with the matter said the Air Peace chairman then requested Ogundipe to provide an account number to which the money could be paid but the journalist insisted that he would only accept the payment in cash.

Onyema continued to play along in line with the script given to him by the law enforcement agencies involved in the operation. He invited Ogundipe to his office in Lagos to collect the first installment of $50,000.

The journalist, however, said he was away in Dubai, the United Arab Emirates, at the time but that he would send a representative to collect the money on his behalf.

On the appointed date, the representative, said to be a female staff of Peoples Gazette, showed up at Onyema’s office as agreed, to receive the bribe.

But at this time, armed operatives of EFCC and DSS, had planted recording devices in Onyema’s office while also taking positions around the facility.

Law enforcement insiders said immediately Ogundipe’s front received the money from Onyema, the operatives emerged from their hiding positions and swooped on her.

She was immediately arrested and driven to the Lagos office of the EFCC where she was interrogated and detained for one week.

The suspect, law enforcement sources said, told detectives that she did not know that the money Ogundipe sent her to collect was a proceed of blackmail.

The EFCC held on to the suspect for days and invited Ogundipe to show up for questioning. The journalist has since gone underground and has so far refused to return to Nigeria from Dubai.

Meanwhile, a further screening of the suspect’s telephone revealed information that further implicated the Peoples Gazette editor, our sources said.

Ogundipe was a reporter with Premium Times until mid 2020 when left after the medium accused him of unethical conduct.