by Kakaaki Reporters
in Business, Entertainment
0 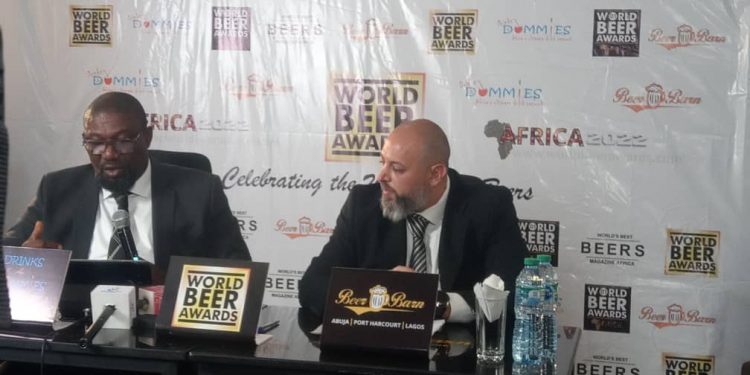 Hospitality360 Africa Ltd, owners of Drinks4Dummies TV and Zermatt Liquor Ltd, owners of Beer Barn Nigeria have partnered with the World Beer Awards to organise the World Beer Awards for the African region come May 2022.
In a press conference held recently in Abuja, World Beer Awards regional director for Africa, Emeka Ihumezie disclosed that the World Beer Awards (WBA) is the global event that rewards the very best in all internationally recognised beers. As it promotes the world’s best beers to consumers and trade across the globe.
He added that the World Beer Awards was given based on 3 major categories of taste, design and icons of beer awards. He noted that for every year in 20 years now,the finest of beers have been winning the World Best Awards in their respective countries, and with many going ahead to win the grand prizes at the global stage in London.
He disclosed that in the 2021 edition of the World Beer Awards in London, Karlsberg, winner of the World’s Best Lager in Germany, took home gold at the global event in London while Aqula Brauhaus Akita, the Best Lager Beer in Japan, Thornbury, took award for the best lager in Canada, and Austra the best lager in Chile coming runners up in the Lager category.
He added that in the Stout category, Serbia’s Salto Stout took the awards for the best stout beer for the year 2021, while the Uk. brand, Original by Innis & Gunn came out tops at the global awards, winning the World Best Bottle Design for the year 2021; even as the Best Can Design went to Amber India Pale Ale.

The director stated that some of the best beers in the world today are brewed in the continent of Africa and as such Africa has its role in the history of beer with ancient Egypt playing key roles in the beer evolution story dating back 500 years ago.
He said as Africa is home to many international and local breweries that are at the top of their games, brewing some of the best beers out there in the world.
It has the capacity to compete at the global stages. Adding that the brewers, the designers, the distributors, bars, supermarkets and the drinkers all deserves recognitions and should be rewarded and awarded. According to him, the WBA is just the right type of rewards to honour all these players with at this time.
He pointed out that the partnership is to ensure success of the awards come May 2022. Where winners at this stage will compete at the global stage in London and the organisers are optimistic of the outcome.
Speaking on the partnership, managing director, Beer Barn Nigeria, Tony Cheikhwafa expressed his excitement at WBA partnership with Beer Barn, while adding that local beers deserve to be on global stage and as it is their deepest heart desire to see Nigerian beers receive these awards recognising their hard work.
He noted that it will also put the continent on the spotlight which will attract investment to the pride of all involved.

No Nigerian Film Will Be Submitted For The 2022 Oscars – NOSC