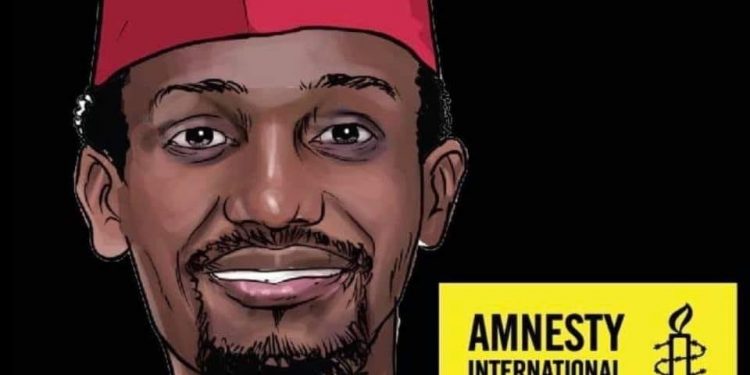 Two years after he was abducted from his home by yet to be identified gunmen the whereabout of Abubakar Idris, popularly called Dadiyata remains a mystery

Two years after he was abducted from his home by yet to be identified gunmen the whereabout of Abubakar Idris, popularly called Dadiyata remains a mystery

For two years now, August 2, remains tormenting to the family and relatives of a popular social media critic and lecturer, Abubakar Idris popularly known as Dadiyata, who disappeared in 2019.

Dadiyata’s wife, Khadija Ahmad Lame, and two daughters, Hanifa and Fatima, continue to harbour hope that someday he will return to them. His aged parents, Malam Danjuma Yero and Malama Fatima, as well as his siblings, still bear the pain of uncertainty that has trailed the disappearance of someone they say was kind and generous to a fault.

Dadiyata’s oldest child, Hanifa (7), has learned the art of patience. Her mother tells her to dwell more on prayers for the safe return of their father, but Fatima, who was eight months old at the time her father was abducted has become inconsolable.

Khadija said, “I don’t know if it is because she is now in school and sees other children with their father, but most times, she becomes inconsolable and says she wants her abba (father).

“It’s like the abduction is happening all over again. There is nothing more to say other than to seek solace in Allah. He has been our comforter in these last two years and we believe in His will.”

Two years after, security agents in Kaduna State say the case is under investigation.

In the early hours of August 2, 2019, Dadiyata was bundled into his BMW car by some men shortly after he arrived his home in Barnawa area of Kaduna.

Dadiyata, who could have been 36 this year had arrived home around 1.am, and according to his wife, he was on the phone when his assailants grabbed him, forced him back into his car and drove away.

The initial insinuation was that security agents, probably the State Security Service (SSS), were the ones who abducted Dadiyata, but that theory was rebuffed when the SSS denied having him in their custody.

The Kaduna State Government, last year, also said it had no knowledge of the whereabouts of Dadiyata, who was also a lecturer in the Department of English and Linguistics, Federal University Dutsinma, Katsina State.

The state government, in a statement by the Ministry of Justice and signed by the Attorney General and Commissioner for Justice, Aisha Dikko, explained that government had no idea of the whereabouts of Dadiyata and had no involvement whatsoever in his abduction.

On the second anniversary of his abduction, Kaduna State police spokesman, ASP Mohammed Jalige, told Daily Trust that there had not been any breakthrough in the case, but that the case was open and investigation was ongoing.

However, Dadiyata’s younger brother, Aminu Idris, said, “It is almost like we have given up on the ability of security agents to investigate this case. The police always claim they are on it but nothing tangible has come out; there is no sign that they will do anything since the abduction.”

Aminu further said that at the beginning of their misfortune, there were rumours that many Nigerians were being secretly incarcerated, adding that even though there was no certainty, such rumour had given the family some hope that Dadiyata might be alive.

He added that, “Those kinds of information kind of calmed our senses, but in the last one year, there has been nothing; even those whispers that he may be somewhere have seized. There is nothing now, everything seems to have stopped.”

Aminu Idris, Dadiyata’s younger brother says it’s been difficult not knowing where his brother is, but the family has lost faith in the ability of security agents to get to the bottom of the case

Aminu Idris, Dadiyata’s younger brother says it’s been difficult not knowing where his brother is, but the family has lost faith in the ability of security agents to get to the bottom of the case

In the face of uncertainty and lack of faith in the Nigerian system, the family say they have now resorted to prayers and ask Nigerians to join them in prayers for the safe return of their son.

Malam Danjuma Yero, Dadiyata’s father, said the pain was fresh but that they had put their trust in Allah (SWA) and prayed that their son would turn out someday.

He said, “He has a wife and two children, my son is a kind man, he loves to help others, but today we are all in distress because no one seems to know where he is and what happened to him. We have written all the letters that need to be written to all the security agencies, yet we have been left to nurture our pain alone.”

Dadiyata’s wife had in the first year after his abduction consistently dialed his number or sent text messages and the text messages always returned unsent. Of recent, she can no longer do that as his SIM card has been recycled by the network provider and now assigned to a new owner.

The brother, Aminu, explained that, “The line has been sold to another customer, any time I call the number, a woman answers. The number was inactive for a while and so the service provider had to disconnect it, recycle and sell to another person.”

Apart from friends and families, social media influencers and international human rights organisations have continued to ask: “Where is Dadiyata?” Amnesty International Nigeria wrote on its Twitter handle: “It is now two years since Abubakar Idris’ abduction by gunmen in Kaduna. His family, his friends and all Nigerians have been asking; where is Dadiyata?”

Aminu said, “I see people posting about him on social media and we are grateful for those who remember him and pray for his safe return, our hearts are heavy.”

Aminu described as heart-breaking whenever Dadiyata’s children demand to see or speak with their father.

He said they tried to console one another as a family but that it was difficult to see the pain in the eyes of the children who were yet to understand why someone would simply abduct their father for two years.

He explained that, “We see the pain in the eyes of our parents, his wife and children. His youngest daughter keeps asking for her abba, and one gets emotional seeing that, especially since she was barely a year old when he was abducted.

“There was a day the mother called me and said the youngest daughter was insisting that she wanted to speak to her abba and I told the mum to put her on the phone. I pretended to be her abba, but after the conversation she said to her mother, ‘This is not my abba, I want to talk to abba.’”