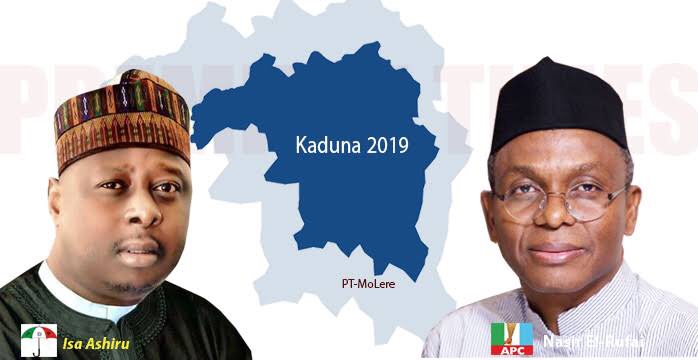 The Peoples Democratic Party, PDP and its governorship candidate, Mr. Isa Ashiru are challenging the declaration of Nasir el-Rufai of the All Progressive Congress (APC) as winner of the governorship elections by the Independent National Electoral Commission (INEC) in the March 9 governorship polls.

The PDP and its governorship candidate, Isa Ashiru has arraigned the forensic expert, but was objected by counsels to INEC, Governor Nasir el-Rufai and the All Progressives Congress, APC.

Counsels told the tribunal that they were just served with the witness statement while the court was on session and they had no time to read the Statement to prepare for the cross examination of the witness, and apply that the witness be stop from testifying.

The objection was rejected by counsel to PDP, Dr. Paul Ananaba on grounds that they had informed the court of its intention to subpoena forensic experts.

Ruling in the matter, Chairman of the tribunal, Justice Ibrahim Bako held that the witness loss the right to give his testimony because the petitioners failed to present the witness statement with the 14 days period.

Comment on the matter, Counsel to el-Rufai, Abdulhakeem Mustapha, SAN said “the tribunal gave 14 days to the petitioners to present their witnesses, and they told the court that they were going to subpoena a lot of witnesses, they didn’t do that until this Morning when the court was sitting when they served us with witness Statement on note for a subpoena witness.”

“We objected to it and told the court that in the spirit of fair hearing that was overreaching because we were suppose to have two days to study the witness Statement and prepare for cross examination.

“And the court agree with us that they were not diligent in prosecuting their case and the court overruled the witness from testifying,” he said.

He added, “We are ready to open our defence. The starting point is that the petitioners told the court that it had 655 witnesses to present within the 14 days given to them by the court.

“But they were only able to call 135 witnesses. They have close their case to call witnesses. And as respondents we have subjected their witnesses to serious cross examination to test the veracity of their testimony.

“What I can tell you is that respondents would present evidence both oral and documentary to show that the election was won by Mall. Nasir el-Rufai,” he added.

On his part, Counsel to the petitioners, Elisha Kurah, SAN told Journalists that the decision of the tribunal to denied their witness from testifying would be challenged at the Court of Appeal.

Kurah said, “So far we call 135 witnesses. The witnesses cover most of the areas were malpractices took place.”

“The forensic expert that came and the court said they would not take him. We still believe that it was not a decision that was rightly taken. We are going to appeal the decision of the tribunal,” he said.

Meanwhile, the petitioners closed the presentation of witnesses after calling about 135 witnesses.

Justice Ibrahim Bako led tribunal, however adjourned sitting to 15 July for continuation of hearing following application for adjournment from counsels to the respondents.